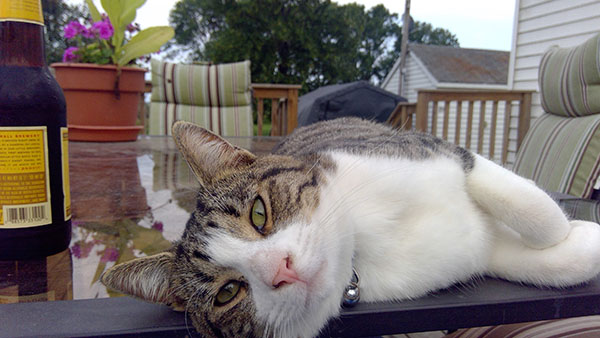 A time when the rush of all the things that haven't yet been accomplished through the summer converge and, like it or not, must be completed before the new school year(s) begin.

This summer has been particularly weird, though. The girls are already done with the supply shopping (highly unusual for us), though we have some new clothes to go find before Labor Day. Things at work have compressed into an unusually chaotic mix, which has put me unduly behind compared to original projections. The nine- and ten-month folks start on the date of this publication, so it's likely to be a bit crazy for the next week-and-a-half before University classes begin.

But those things, among others, will "buff out" as I often say.

What's also been unusual is our summer weather pattern. It's been remarkably beautiful and temperate outside, which has resulted in a higher-than-average amount of time spent in my "outdoor office," also known as the back deck.

This past weekend provided a brief respite of sorts in that I have spent the vast majority of daylight hours (after sleeping in a bit) sitting outside under the umbrella.

And it's been wonderful.

Reading (books and electronic medium), eating (breakfast and light lunch), drinking (coffee, water, beer), listening to all sorts of music (outdoor sound systems are life-changing), working (on some backlog and personal stuff), resting, and otherwise taking a break from the chaos.

And it's been wonderful.

I've also been hanging out with my "outdoor office companion," Larry the Shed Cat. He's the lone holdback from last summer's adventures of having folks dump cats at our house. He well-earns his keep as the outside cat, catching all sorts of random vermin and creatures in his adventures. Now just over a year old, he's a good addition to the outside office. He'll go off and "cat," and then return for some attention...or when he's ready to go back into his shed for the night. He takes a lot after his presumed father, Macho, whose likeness graces this posts's headline.

Late last summer, Macho was taken ill (likely by way of eating something sick) in his lengthy travels, and he is sorely missed. But we have Larry in his place, who is equally as awesome and friendly.

Mid-August is not traditionally a time when I spend most of a weekend sitting outside, but I'm totally taking advantage of this brief respite during the crazy season. Once classes start up again, I'll take my pseudo-traditional vacation sometime in the early fall semester. It's weekends like this that give me just enough of a refresher to push through that final stretch.

Headline photo of former outside office companion by Matt Zaske